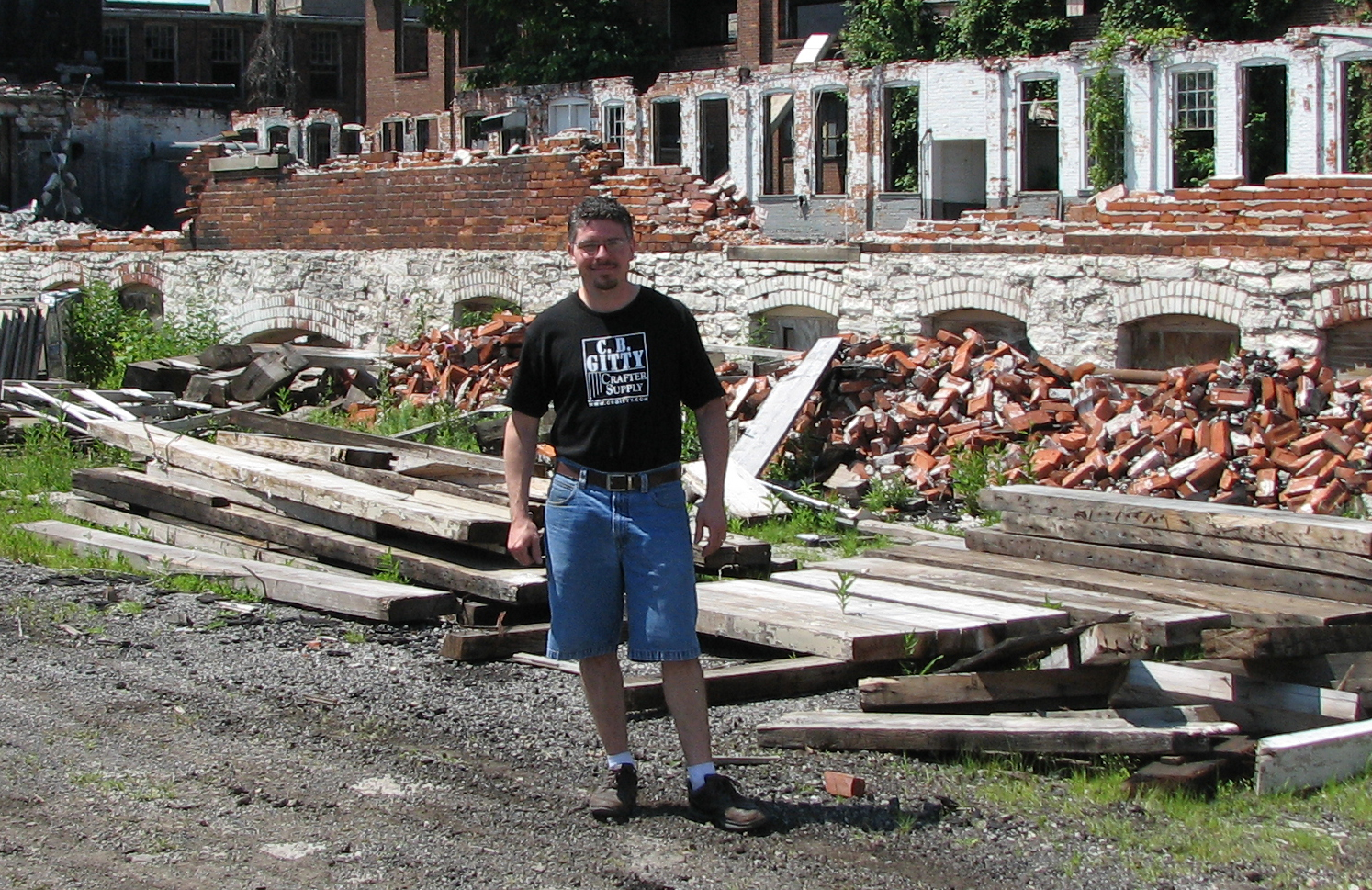 In 2014 C. B. Gitty owner Ben Baker was able to buy a few hundred board feet of antique heart pine beams and maple floor boards from the 112-year-old American Crayon Company factory in Sandusky, Ohio, which was in the early stages of being torn down by a salvage company. Here is the history of that amazing old building, This page attempts to tell the history of the factory, as well as the important role it played in the personal history of Ben's family.

Here is a link to a page that gives a nice historical overview of the company.

Here is the photo journal of Ben's trip through the complex on Flickr. He has entered a text description for each photo to help give an idea of what is shown.

Finally, here is why the dirty old factory has so much meaning to Ben:

My grandfather Irvin Baker worked at the American Crayon factory in Sandusky for about twenty years. He worked in the maintenance department, the group of men tasked with keeping the aging factory running. Much of the equipment in the factory dated back to the early days of the 1900’s, from manufacturers long since out of business, so when something broke the parts had to be made from scratch. Some of the machines were quite intricate, and it was the job of the maintenance department to know exactly how they functioned and how to fix them. Generally one guy was expected to be the expert on one or two different types of machines.

One of my grandpa’s specialties were the machines that made the chalk pencils. These “pencils” consisted of a thin cylinder of chalk with many layers of paper wrapped around it. A string ran along the chalk and was used to tear the paper along a perforation, which would expose more of the chalk. This allowed only a small amount of the chalk to be exposed (kind of like the lead in a pencil), and the paper wrapping kept the hands free of chalk. The machines that made these ver very intricate and had many moving parts, and my grandpa studied the machines until he understood exactly how they worked. If the operators reported that something was a little bit off --- not enough string was being measured out, or the paper was crooked, or the chalk was too short, he knew how to adjust it to get it back into spec.

In addition to repairing the actual machines, another job of the maintenance department was to keep the aging structure itself functional. Over the years the heavy fork lifts running back and forth wore out the wooden floor, so large steel “diamond plates” were bolted over the holes. The miles of asbestos-wrapped pipes had to be carefully painted every year to keep the dangerous asbestos contained. The rickety ladder up to the coal elevator perched on stilts above the boiler room had to be ascended, to service the machinery that kept the coal moving and the boiler fired.

In the early 1980’s three more of my close family joined the ranks of American Crayon employees. My mother worked for a time on the second floor of the main factory building, running one of the machines that packaged coloring crayons into boxes. Her job involved grabbing big handfuls of each color of the crayons and loading them into the hopper that fed them down into the packaging boxes. Her brother, my uncle Ed, worked for years in what was called the “lead plant”, where the lead (graphite) pencils were made under the famous Dixon Ticonderoga brand.  Another uncle, Steve, worked for a while in the receiving department.

My grandparents played a large role in raising me, and I spent a lot of time with them as a child, so I grew up listening to the stories my grandpa would tell about the American Crayon factory. The names of the guys he worked with in the Maintenance department… Vince, Mooch, Henry, the foreman John Camella, became as familiar to me as old friends, though I had never met them. I will never forget the sight of my grandpa’s work-hardened hands as he sat at the supper table, the lines in them blackened with grease and grime that not even Lava soap could wash out. It would be a good while after his retirement that the last of those dark lines finally faded away.

One time in the early 1980’s when I was six or seven, the factory had an open house event and I was taken on a tour of it. The memories are vague, but I remember the hot cavernous space of the wax casting building, the smell of the wax, the loud clacking and clanking of the old machines, the voices of the middle-aged women working them. I remember the bright orange glow of the coal-fired boiler, when the door was opened. I remember the fork lifts rumbling by carrying pallets full of product, the old floor sagging and creaking beneath them.

Over the years as equipment was replaced or worn out, my grandpa would bring home stuff from the old factory. Electric motors, an antique air compressor, old hardwood filing cabinets, antique typewriters, some of the old finger-jointed wooden boxes, industrial light fixtures, and more. We never had a shortage of crayons, paints or chalk when I was a kid.  He would also bring home worn-out stuff to be taken apart for the scrap metal in it – brass shavings from the machine shop lathes, copper wiring and pipe, electric motors, and more. I still have some of the stuff that he brought home – one of the filing cabinets, a 1930’s era manual Royal typewriter, some of the wooden boxes, and other odds and ends.

My grandfather first retired in 1994 and continued on as a consultant until 1997 or so, as he was the only one left who still knew how some of the old machines worked. He oversaw some of the preparations for moving some of the production down to a facility in Mexico (which didn’t last too long before going bankrupt). It wasn’t too long after he finally retired before the plant was shut down and abandoned.

For the next 15 years or so, the factory sat vacant. Various efforts were made to sell the place off, or find someone to tear it down, but the enormity of the job and the expense always caused the deals to fall through. The newest part of the building, a mostly steel beam structure at the far eastern end of the complex, was sold to a company that repairs semi trailers. But the main part of the complex, the old red brick buildings, remained empty and falling into ever-greater decay. Stories ran in the local paper lamenting the dilapidation of the structure, the huge fire hazard, and reporting that homeless people were squatting in it.

Though I had moved from Ohio to New England at the end of 2000, when I saw the old factory on a trip back home, I always felt a pang that such a great old bastion of American manufacturing had fallen so far. And in more recent years, after starting C. B. Gitty Crafter Supply and getting hooked on making instruments out of reclaimed and repurposed materials, the old factory called to me even more. I would drive slowly by it, dreaming of being able to get inside it and pull out some great old stuff… wood, metal hardware, signs, fixtures, whatever – stuff that I knew had to be littered all over the old place. I thought it would have to remain a dream.

Finally in 2013 the property was purchased at foreclosure auction by a Texas-based company that specializes in tearing down old buildings for salvage. They are rumored to have paid only $50,000 for the property, though they immediately had to spend several times that amount on asbestos abatement, as the old place was full of it. The demolition of the first of the buildings began at a fairly slow pace, and (luckily for me) had not progressed all that far a year and a half later, with only one of the brick structures being fully demolished as of the summer of 2014.

Through a reporter at the local newspaper who wrote a story on the demolition in late 2013, I was able to track down the owner of the company tearing down the factory. Though they usually sell reclaimed wood by the tractor trailer load, I told him my story and he agreed to let me buy as many shorter pieces (less than 8 feet) as I wanted at a very reasonable price. I drove the Gitty van from New Hampshire to Ohio in late June of 2014, and drove it through the gates early on a hot and sunny Thursday morning. I had only the name of the job foreman that I was supposed to meet. I wasn’t sure whether this would be a “take your wood and go” deal, or whether I might be able to see some of the inside of the structure.

It turned out that the two guys who showed up were the only two still actively working on the demolition project, and that progress was going very slow. They were more than happy to show me around the place, so we proceeded to spend the next 2 hours exploring the old building. Every floor of every building, from basement to roof, looking at the few old machines and fixtures that remain. For all of its decrepitude and dilapidation, the old place still held a quiet, timeworn grandeur.

For a lot of people, the inside of that old factory would have been just a smelly, dirty and dangerous derelict, full of rickety staircases, rotten wood, holes in the floor and pigeon crap. But for me, it was deeply meaningful. I have always loved history, especially manufacturing history, and here I was in one of the classic American factories, one that had such a large impact on my family and my own life.

I was able to recognize some of the things that had figured in some of my grandpa’s stories about the place: