We created this cigar box guitar kit with one goal in mind - to make a kit that would allow anyone to build a real, playable cigar box guitar in about an hour at the kitchen table, with only the most basic tools (a screwdriver and small hammer).

The entire build took him about 30 minutes.

This kit contains all of the parts you need to complete your cigar box guitar - the box, neck, hardware and strings.

Don't believe us? Check out the full assembly guide here to see just how simple it is.

Or check out the full step-by-step video below on how to build, string, tune, and play the Pure & Simple Cigar Box Guitar Kit.

For the unfretted version we have pre-marked the hardwood neck with drawn fret lines to a 25-inch scale.

We have also pre-notched the neck for the threaded rod nut, as well as the location of the special "Flying bridge".

As an added bonus, we even include a slide!

This kit builds the traditional "stick on top" cigar box guitar in the style of mountain dulcimers, where the neck rests on top of the box instead of running through it.

The result is a nice, loud CBG tuned with the popular "Open G" tuning of G D G, which is what most of the Youtube how-to-play video presenters use.

> One hardwood neck, pre-drilled , marked and prepped with all the necessary holes. The neck included with the fretted kit version has a 1/4-inch fretboard pre-mounted to the top of the neck.

> One cigar box drilled with mounting holes and sound holes. Please note: box style may vary slightly from these pictures, but assembly steps will be the same. 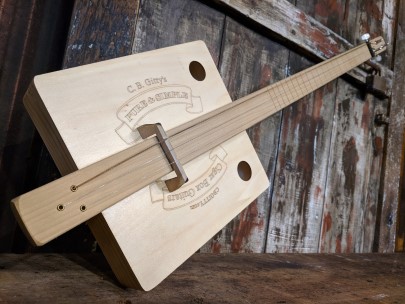 Learn how to play your Pure & Simple Cigar Box Guitar

The Pure & Simple Cigar Box Guitar Kit is enjoyed by everyone

We gave this kit a full test-run at a special charity event out in Los Angeles in mid-august 2014, and it was fun to watch the attendees, many of whom were Hollywood movers and shakers, putting these kits together and then carrying them around the event grounds.

If they can do it, YOU CAN TOO!

Check out the photo of TV actor Adam Scott (best known for his role on the hit series Parks & Recreation), holding the SECOND guitar he built with his son that day. 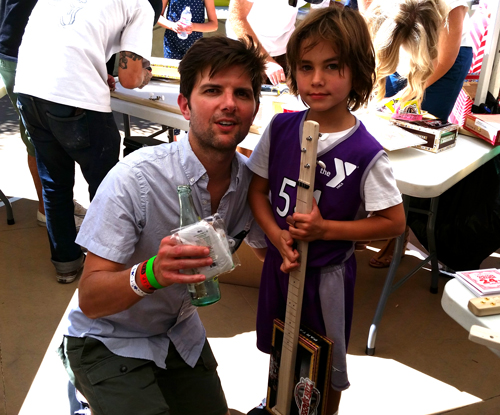 As mentioned above, this kit contains all of the parts and materials you need to complete your guitar, with complete illustrated assembly instructions so that there is no guesswork or confusion.

All you need is a screwdriver and hammer from your kitchen junk drawer.

It just doesn't get any easier than this kit.

Adding a Pickup (Basic Piezo Harness) - This is a great way to electrify your cigar box guitar so it can be plugged into an amplifier. Installation is easy, but you do need to have some way to drill a hole in the side of your box. Check out this how-to-article, or watch this how-to video to see how to install the basic piezo harness.

MSRP:
Now: $8.99 - $45.99
Was:
Select your desired wood type and fretting options above. These custom, American-made fretboards are designed specifically for use on cigar box guitars with necks 1 1/2" wide. The fretboard is 20"...

MSRP:
Now: $89.99
Was:
Build what you Play, Play what you Love!  Great for new and experienced builders, this kit comes with everything necessary to build your very own 3-String Fretted Cigar Box Guitar. Fretted...

MSRP:
Now: $20.99 - $42.99
Was:
Select your desired wood type and fretting options above. These custom, American-made fretboards are designed specifically for use on cigar box guitars with necks 1 1/2" wide. The fretboard is 20...

MSRP:
Now: $12.99 - $47.99
Was:
Ben Gitty has taken one of our popular Hard Maple fretboard blanks and printed it with his boldly colorful original design, a montage of patriotic American images. These fretboards are intended for...

MSRP:
Now: $3.99 - $27.99
Was:
Open G "GDG" is perhaps the most popular tuning for 3-string cigar box guitars, and for good reason. It's just so easy to bang out good ole gritty blues using this classic tuning. Sometimes known as...

MSRP:
Now: $8.49 - $12.99
Was:
Presenting our second-generation “GEN2” line of plastic fretting templates! A huge improvement over the original model, these templates are ¼ the thickness, include more template...

MSRP:
Now: $36.99
Was:
Build the mythical one-string guitar from blues and Americana folklore.   This is the instrument that Blind Willie Johnson first learned slide guitar.   Countless other music legends...

MSRP:
Now: $7.99
Was:
This set of Shane Speal Signature tuners is PERFECT for first-time Cigar Box Guitar builders, since it has exactly what you need and tells you how to use it, with no leftover parts! This is a set...

MSRP:
Now: $64.99
Was:
Notes bloom and ring out in our Wooden Box Ukulele kits.  Make a fully playable instrument with a vintage "throwback" look.  Everything is here, from the neck, fretboard...even the box!...

MSRP:
Now: $9.99
Was:
This is a set of 6 economy, open-gear tuners, perfect for use on guitars, cigar box guitars, dulcimers, banjos, diddley-bows and other stringed instruments. This set includes 6 chromed plastic...

MSRP:
Now: $7.49
Was:
Shane says:  "When Southbound Strings asked me to develop a set of professional electric guitar strings for cigar box guitar, I demanded three things: The strings must include a...