Want to tame the sound of your disk piezo-electrified cigar box guitar? Would you like to keep the disk piezos ease-of-use and get rid of the shrill high-end they often have?

You do? Well then, let's talk about using capacitors with your disk piezo pickups – the can't miss trick to make your disk piezo-electrified cigar box guitars sound a whole lot better.

You can find plenty of in-depth, highly technical information on the internet to fully grasp what capacitors are and how they work.

Here, however, we're going to discuss in simple terms only what you need to know about capacitors and how they improve the sound of your disk piezo-electrified CBG.

Disk Piezos Are So Darn Hot

Disk piezos are cheap and easy to find on your own if you don't want to spring for the small price tag.

For instance, you can harvest disk piezos from door buzzers, alarm clocks, and old microwave ovens, to name a few sources.

In terms of CBGs, disk piezos are simple, little devices that pick up vibrations from the instrument and convert those vibrations into signals that get sent to the speaker.

To function as a pickup, a disk piezo need only be fastened to the cigar box, often inside the box and on the underside of the lid/soundboard, with a bit of hot glue or even double-sided tape.

Well they certainly are, and are also the easiest way to electrify your CBGs.

There is, however, a price for that simplicity.

Much to the chagrin of some unwary builders, disk piezos pick up any bump or scratch you make on the box, such as with your strumming hand.

It may not seem like a big deal at first, but when you're playing your CBG through an amp and you hear almost as much bumping and scratching through your amplifier as you do music, things can become a bit discouraging.

And because they're so sensitive, piezos also feedback easily.

This makes them difficult to play loudly through an amplifier and especially poor at handling an overdriven tone or distortion that you may want to use to play some gritty blues or rock n' roll.

Plus, disk piezos have a rather shrill high end which, without a preamp or other equalizer-type device used in conjunction with the guitar and amp setup, can grate on your ears over time.

To bypass those issues, and quickly and easily improve the sound of any disk piezo, you can use the simple little device known as a capacitor.

The foremost reason to use a capacitor in your disk piezo pickup circuit is to improve the overall sound of the guitar.

As Shane Speal, King of the Cigar Box Guitar, has often said, disk piezos left unchecked, without some sort of preamp or other form of equalization, have a shrill, "quacky" sound.

A simple fix is to remove that high end and reduce the "quack" is to solder a capacitor right into the pickup circuit.

Adding to that, a capacitor will also reduce how susceptible to feedback a disk piezo is.

Try plugging your disk piezo-electrified CBG into an amplifier and turning it up enough to really hear and feel how cool it sounds.

Unfortunately, you can't really turn it up all that much without hearing anything but feedback, and not in some cool Jimi Hendrix sort of way.

A capacitor will help change all that, enabling you to turn up your CBG without the fear of blowing out your speaker.

So really, capacitors change the tone of a disk piezo-electrified CBG from that sharp, sometimes shrieking sound, to something more subdued and mellow, capable of being played at a loud volume.

Now that you know why to use a capacitor in your disk piezo harnesses, you may want to know exactly what a capacitor is.

Well, a capacitor is a device that diverts the flow of electricity in your guitar pickup circuit, "bleeding" or "rolling off" the high end frequencies.

But for your CBG, what does that mean?

Those low-end frequencies kept in the circuit are then sent to the jack and amplifier and are what you hear when you play your CBG.

How Do Capacitors Work?

"Hold up" you may say. "What does it mean that the high frequencies flow out of the circuit?"

Great question and the answer helps to explain how capacitors work.

So, the high-end frequencies that pass through the capacitor then flow out, or escape through the ground leg, of the circuit.

In contrast, the lower frequencies, as mentioned earlier, are kept within the circuit.

This changes the overall tone and sound of the electrified CBG, removing much of the shrill, high-end frequencies and permitting the warmer, mellower low-end tones out to the amplifier.

3 Ways To Use Capacitors With Your Disk Piezo Pickups

Let's take a look at 3 different ways you can get rid of those ear-piercing high-ends and keep those big bottoms in your disk piezo pickup harness – all of them easy to do yourself and all of the components available from C. B. Gitty!

The following disk piezo harnesses are built using some combination of the following high-quality C. B. Gitty components... 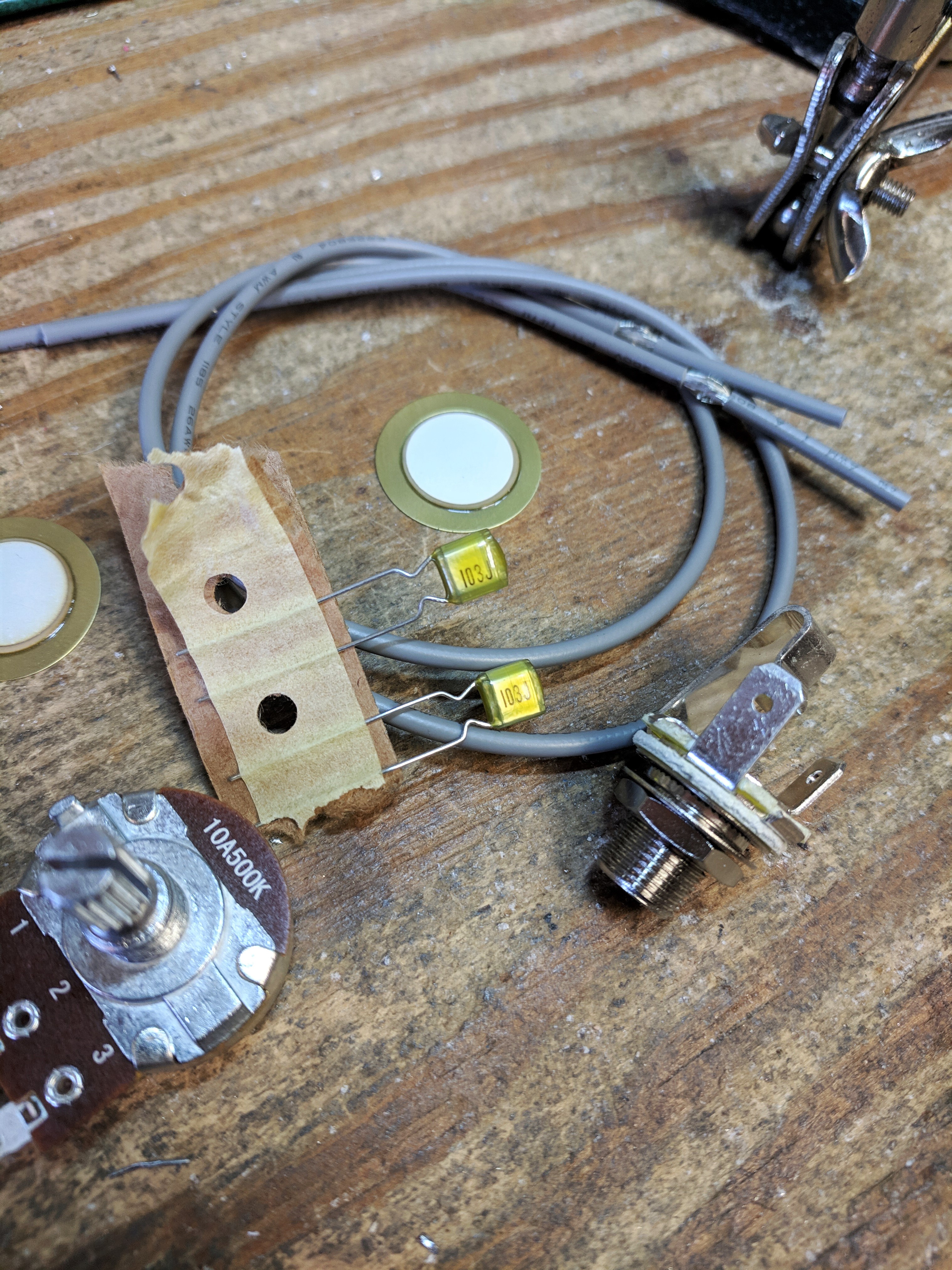 Now that you know the C. B. Gitty components used here, next we'll take a look at a simple use-case of a capacitor in our ever-popular Basic Pre-Wired Piezo & Jack Harness with Shielded Cable. 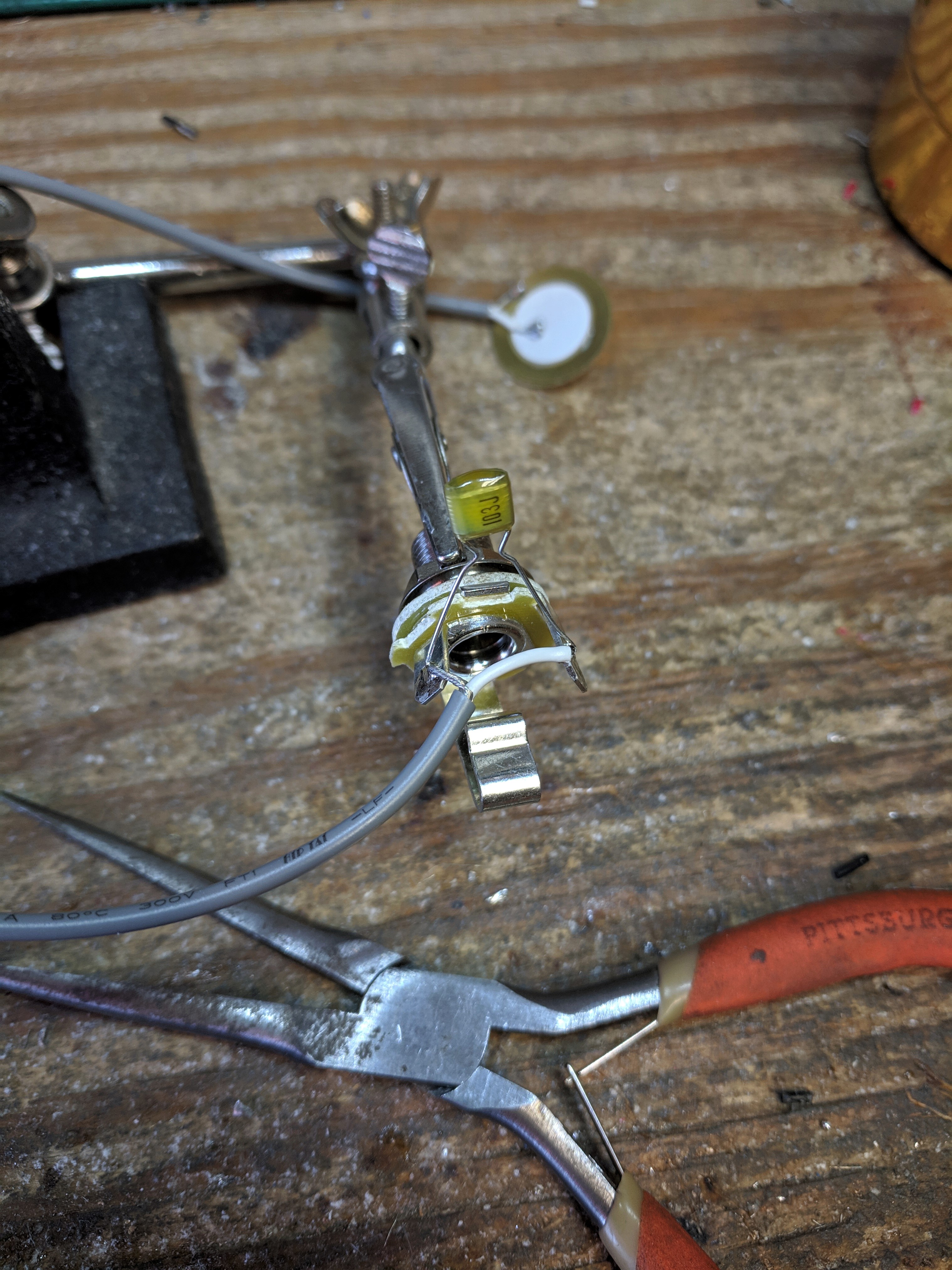 Above you can see that simple jack to disk piezo harness.

To tame that hot piezo, all you have to do is solder in your own .01 µF capacitor.

While .01 µF is what we like to use in conjunction with disk piezos, we also carry other capacitor values that may suit your tastes better.

As always, we strongly encourage your own experimentation to dial-in your preferences and to also have fun learning all you can about your CBGs.

Since the capacitors we use and sell here at C. B. Gitty (film capacitors), have no polarity, it doesn't matter which capacitor leg you solder to either the positive or ground jack terminals.

How much easier can that be?!

Note that other types of capacitors, such as electrolytic capacitors, do have legs specific to positive and ground. But again, at C. B. Gitty we use film capacitors, which are not polarized, for use in cigar box guitar electronics.

Now, let's take things a step further and add a volume control to the harness. 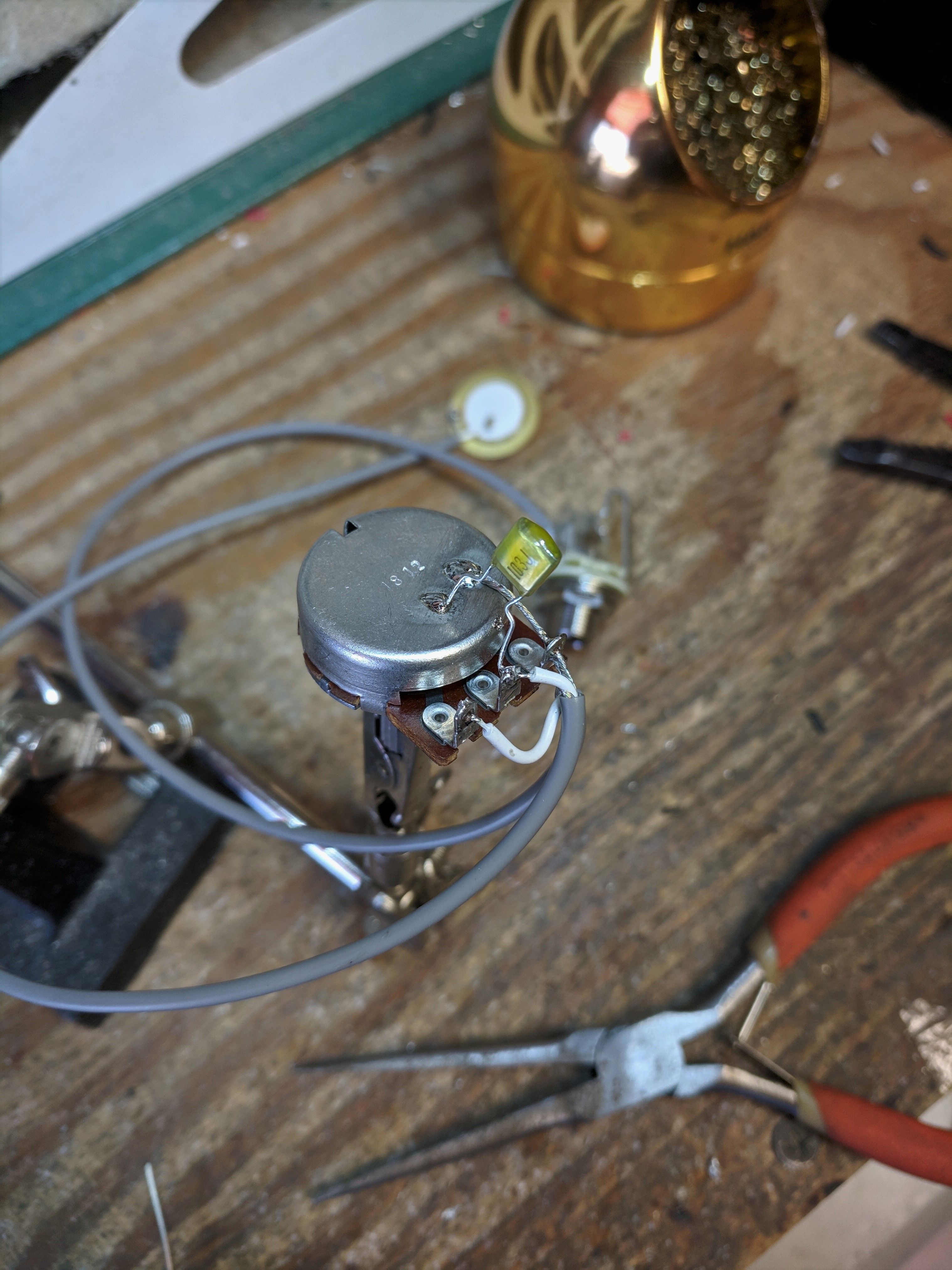 Here we have an example of a disk piezo pickup harness that includes a volume control, similar to our highly coveted Cap-o-Tone and Disk-o-Tone pickup harnesses.

As you can see, simply soldering a capacitor from the input terminal (where the positive lead from the disk piezo is wired to the pot) to the back of the pot is all you have to do.

In this case, not only do you have on-board control of your volume while playing your CBG, but you've also taken off some of the disk piezos high-end.

Next up is the third, and most fine-tunable, example of how to use a capacitor with your disk piezo pickups. 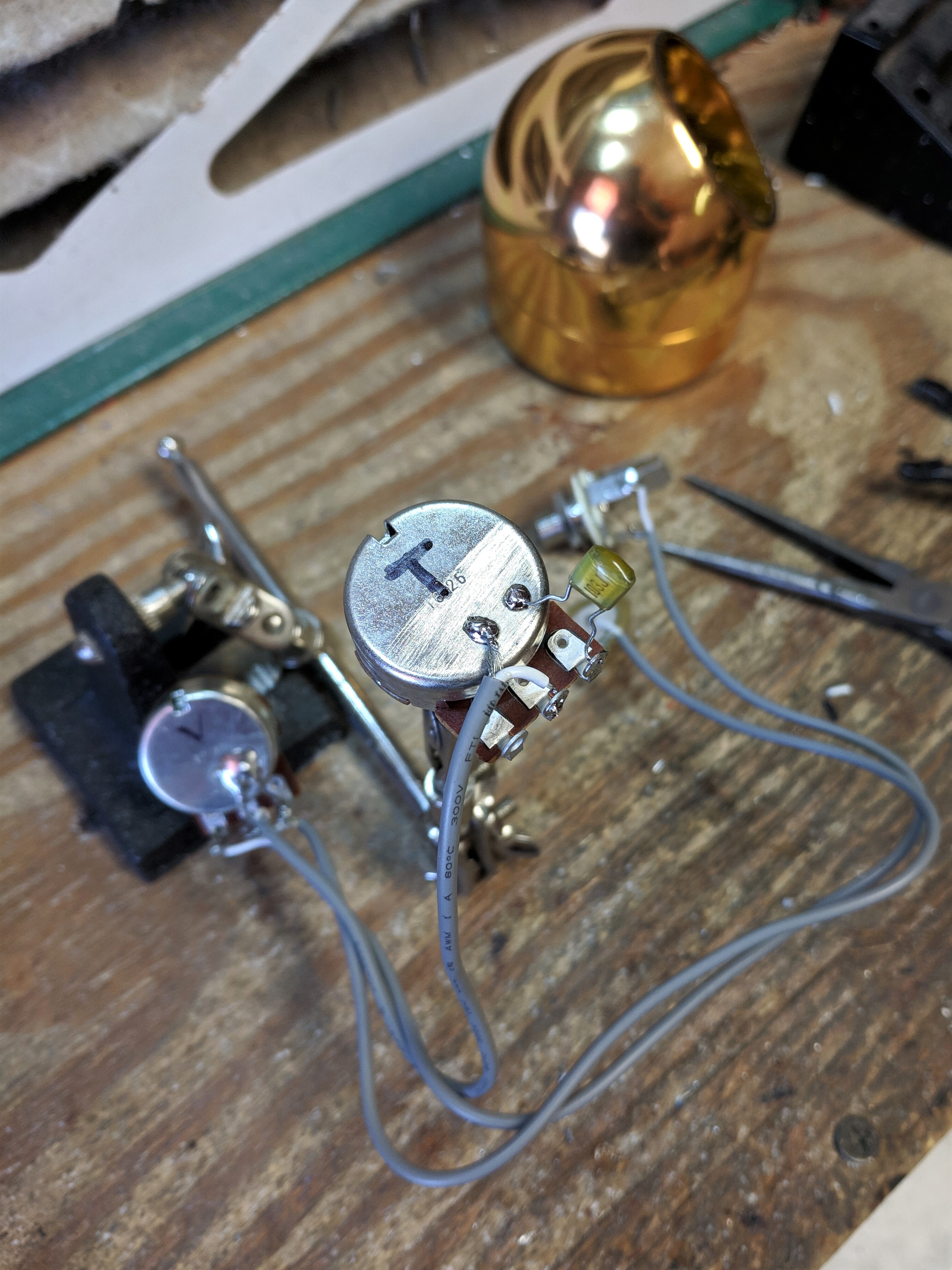 This harness is the most elaborate of the three here.

It, of course, has a disk piezo and jack, and also includes a volume and a tone control.

In this case of this harness, the capacitor is soldered to a separate 500k pot that's then soldered to the volume control.

Perhaps you haven't thought before about this kind of soundscape customization for your disk piezo-electrified CBG, but it's entirely within your grasp.

And if you're not confident enough to solder one of these harnesses on your own, or just don't have the time or tools to do so, we've got you covered.

Among the myriad products that we make right here in the Gitty shop located in Rochester, New Hampshire, (so you know they're U.S.-made) we carry the Premium Volume and Tone Pickup Harness for Cigar Box Guitars.

This first-rate harness is available pre-wired with 20mm disk piezos and, as an alternative, also pre-wired without piezo pickups so that you can solder in the size disk piezo of your choice.

Even better, the harness above is sold with your choice of hardwood mounting plate, in either exotic padauk or gorgeous mahogany.

So not only do you install a ready-to-roll premium disk piezo pickup harness, fully equipped with a capacitor-enabled tone control, but you've also got a beautiful hardwood mounting plate for ease-of-use that complements you're finest electric CBG.

All that thanks to the simple, little capacitor.

As you can see, including a capacitor in your disk piezo-electrified CBG is certainly within your wheelhouse.

Also covered are the high quality components we carry, at fair and honest prices, for you to assemble your own rocking pickup harnesses with high-end bleeding capacitors.

And if you're not in the mood to solder your own, we've got a premium harness just waiting for you to install it in your next favorite build.

Armed with all this knowledge, in what way will you include a capacitor in your next disk piezo-electrified cigar box guitar?