I am pretty much a newcomer to junking, picking, thrifting, yard sale-ing and the like.

Though I grew up poor and most of my clothes and toys were second-hand, it is only since getting into making cigar box guitars and other handmade instruments that I have begun to appreciate the value of junk stores, thrift stores, yard sales and to a lesser extent antique stores.

Once you realize how many different things you can make musical instruments out of, it isn’t long before you know that second-hand buying is  the best way to get the best stuff at the best prices.

You may ask, isn’t that a bit soon to start writing a guide telling other people how to do it?

In short, yes it is - but I am learning as I go, so I wanted to share what I have picked up thus far.

I am sure veteran yard sale-ers and thrifters will have a lot they could add to this, and that’s fine – for me, it’s still a work in progress.

Keep in mind that I am talking purely about buying stuff to be made into instruments, not about buying to resell or buying to collect. There are plenty of guides out there already for that sort of thing.

First, a list of the sorts of things I am looking for when I go out junkin’.

This list is not all-inclusive, because you never know when you’re going to run across something you’ve never seen before, and in a flash of insight, you realize you can make a guitar out of it.

There is no requirement that you know what something actually is, or what it was used for – but of course, that helps.

Junk to Keep an Eye Out For

An awful lot of household wares used to come in metal containers, before cardboard and plastic took over, so there is a LOT of this sort of stuff out there.

Even metal mugs can be used as canjo resonators.

I haven’t gotten into using the more substantial gas and oil cans yet since making instruments out of these larger items presents unique challenges.

Miscellaneous smaller metal pieces that can be used as resonators 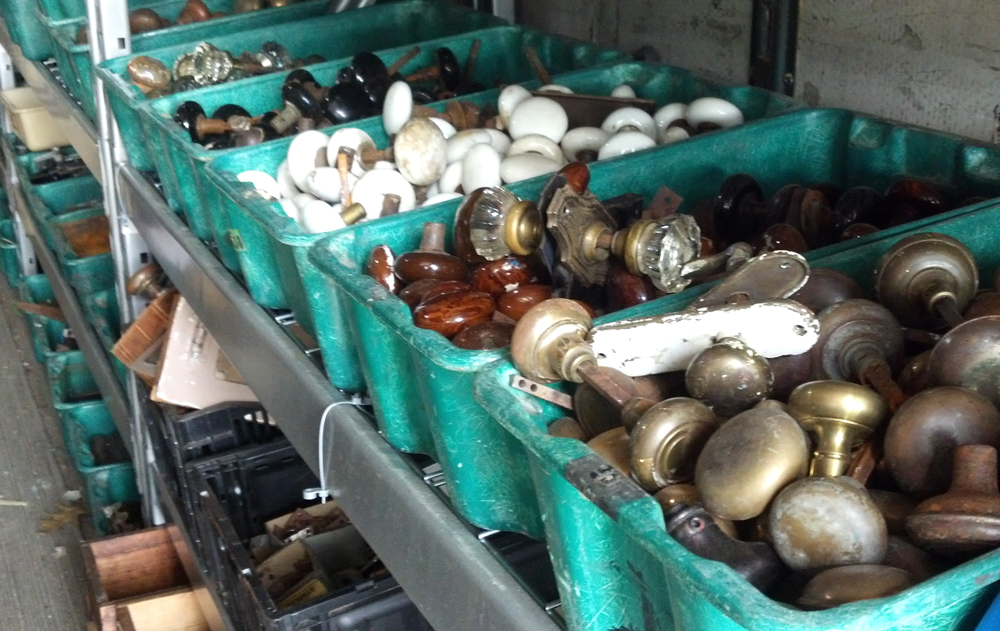 Keep an eye out for reclaimed architectural salvage like doorknobs, hinges, latches, catches, and the like. Old bolts/lag screws/etc. that show their age.

Any smaller metal pieces that can be glued or screwed to an instrument to give it some extra visual appeal.

I personally am always on the outlook for old reclaimed wood,particularly if the story of where it came from is known.

It sure is easier to buy a bunch of old wood than it is to put it to use though.

Old boxes or anything with dovetail or box-jointed corners, especially if it has readable lettering on the panels are always excellent finds.

Unfortunately, these have been very “hot” lately, and finding a reasonable price on them is hard.

This is where you get into trouble for dragging home too much rusty old junk.

If there is one thing I have learned so far, it’s that it is an awful lot easier to accumulate piles of stuff than it is to figure out how to make instruments out of it.

Where to Buy Stuff

Now that you know the sorts of things I am on the lookout for, here is my working list of tips for effective junkin’.

Get as close to the source as possible: Yard sales

The closer you get to the source (the actual people who own the stuff, not people who are trying to resell it for a profit), usually the better the price you’ll get.

There are a couple of exceptions to this, but often, yard sales, garage sales, estate sales and that sort of thing are the source of the best bargains.

Of course some people research what all of their stuff is worth and try to get full retail for it, but for the most part, people just want to get rid of what they see as their junk. And a lot of it will, in fact, be junk.

You have to be willing to walk by a lot of junk and make quite a few stops where you don’t buy anything at all, to find the good stuff.

Donation-based thrift stores can be a great source of parts for making musical instruments.

So can “yard sales” set up by the folks who drive around the trucks with “We’ll clean out your stuff for free” on the side.

Usually, thrift stores and free clean-out people are just looking to make a few bucks on stuff that they got for free, and they rarely do much research into what things are worth.

Some thrift stores might be a bit more savvy about researching actual values of things – you’ll have to get an idea of where the best bargain potentials are in your area.

These can be a crapshoot, and you never know what you are going to see.

Flea markets can range from the lowest of low-end yard sales to a more or less professional cadre of slick dealers looking for full retail prices.

You never know what you might find though… a few cigar boxes, some decent tins, some old beat up guitars that can be used for parts, who knows!

Be ready to haggle – that is part of the flea market experience, and if you pay the first price that they throw out, you’re probably paying too much. 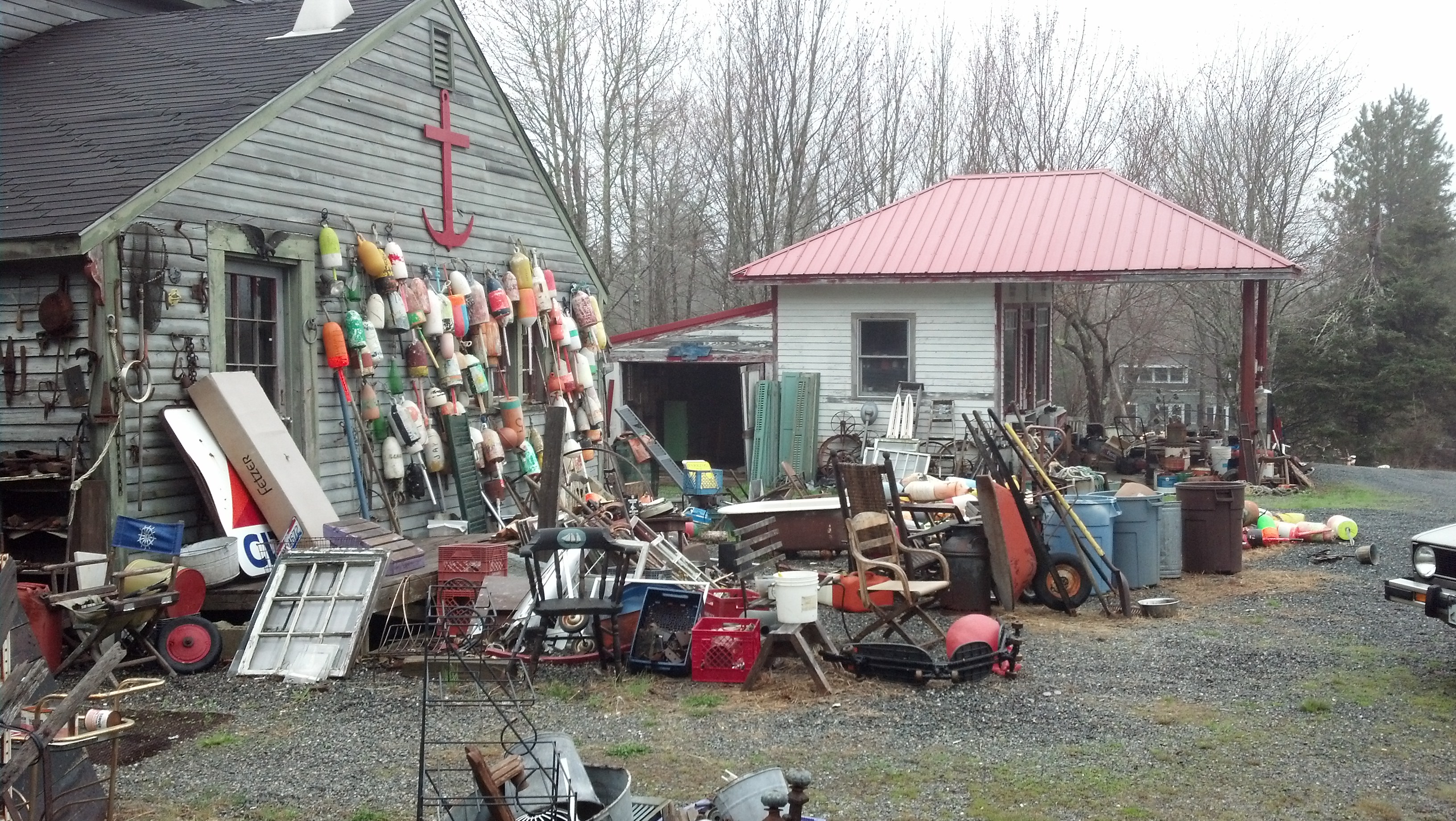 These are a step or two down from antique stores – but that’s a good thing!

Personally, the more piles of rusty junk out front, the happier I am. These sorts of places seem to be harder to find these days, but they’re still out there.

You have to be willing to dig through rusty junk, squeeze through packed semi-trailers, get grease, mud and random gunk on your hands.

You have to dodge wasps, step over bumblebee nests, tiptoe around ticks, keep up with your tetanus booster shots, and watch out for broken glass. You never know what you might find in that next semi-trailer or outbuilding.

These are tricky. Usually antique store owners know what all of their stuff is worth, and they price it at the high end of the scale.

It is possible to find antique stores out there, usually on the lower end of “antique” and the upper end of “junk,” where the owners don’t really keep up with current prices, and you can get some good deals.

I have learned that the magic phrase “I don’t do anything online” can mean good deals.

These can be a tough nut to crack. Scrap yards tend to be busy places, and the people there tend to be… rather gruff.

When your day to day job is moving tons of scrap metal around, having to deal with somebody wanting to wander around and buy a few trinkets can be pretty annoying. So be ready for that if you’re going to go in.

I personally have only tried to make inroads into one local scrap yard, and it has been hit and miss.

I managed to get 13,000 beer can tops at just over the scrap metal value from the owner, but a few months later the same guy had no idea who I was and was too busy to even deal with me.

So there you go. 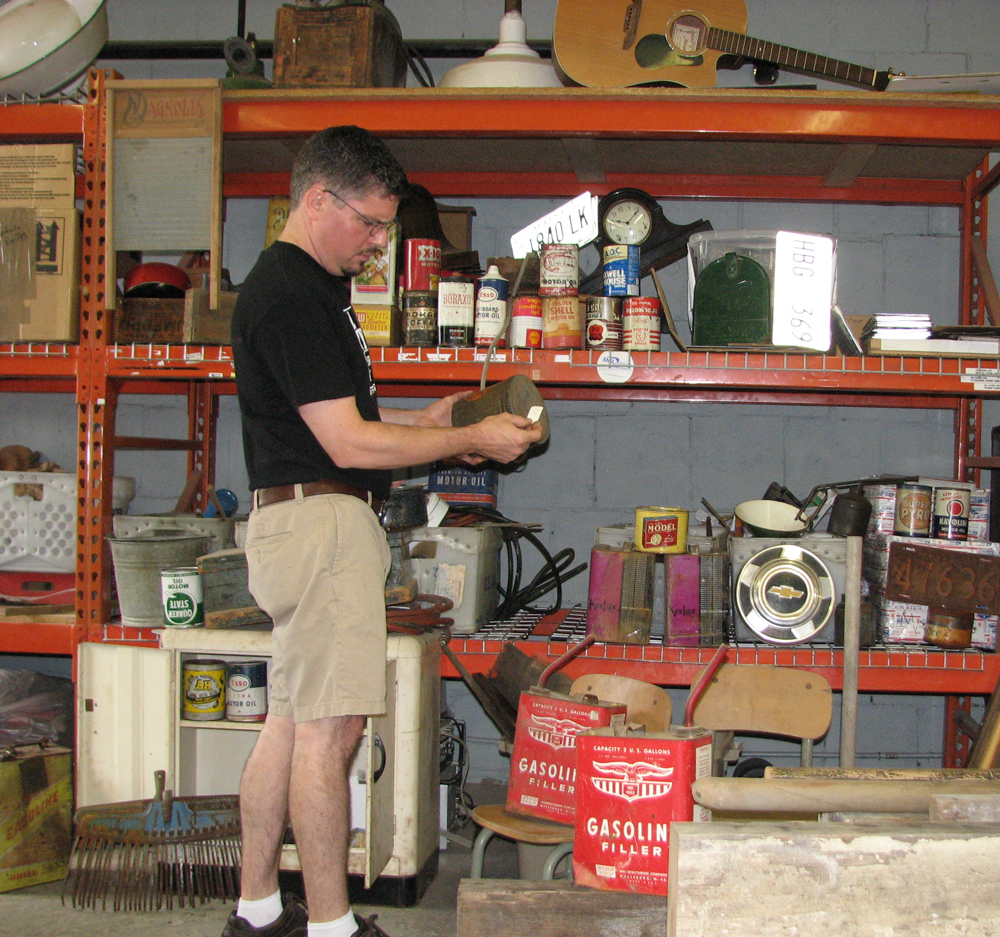 Sometimes it doesn’t hurt to ask. Take a page out of the American Pickers playbook.

If you’re out somewhere, where stuff wouldn’t usually be considered to be for sale, and something strikes your eye, go for it.

If you’re polite, the worst thing that can happen is you’ll get told “no.”

Tell them you want to make a musical instrument out of it.

Describe other stuff you’ve built, or show them a picture.

Tell a story, pique their interest, and it just might work.