At C. B. Gitty we've launched our own line of resonator cones: The "Hubcap" Series of cigar box guitar resonator cones, spun from metal paint can lids. To folks out in the "real world" (the non-homemade-instrument-building public), this might sound like gibberish... but cigar box guitar builders immediately know it's a big deal.

Why It's A Big Deal

It's a big deal because building resonators is an interesting and important part of the larger cigar box guitar building hobby.

It's a big deal because the supply of spun cones for these instruments has always been very limited.

It's a big deal because re-purposing something (a paint can lid), into something else that makes music, really strikes at the heart of the whole handmade music movement.

To take an everyday object, even a cast-off piece of garbage, and give it a voice is a special thing.

Why We Started Spinning

The process of these cones started when Charles Atchison announced he was getting out of the reso cone business and discontinuing his line of Lightning and Thunder spun cones.

For years, Charles, and Mike Lowe down in Texas have been the only suppliers of spun resonator cones for cigar box guitars.

Charles' announcement was met with dismay throughout the CBG community, and I was no exception.

C. B. Gitty had been selling his cones for several years, and they were a popular item.

I knew that somehow, spun cones needed to continue.

I discussed it with Charles and made him an offer to buy some of his operation, but we weren't able to come together on a price.

We stepped away from the table on good terms, and I wish him the best going forward.

Just today I agreed to buy all of his remaining aluminum cones.

It Started With An Experiment

At that point, we started experimenting here in the Gitty shop with an old lathe of my grandfather's.

I called in Jeff Rich, (drum-stick maker, part-time technical genius and tinkerer here at C. B. Gitty, seen below), who has extensive experience with mechanical operations and lathe work.

We started by trying to turn thin aluminum disks like Charles had been doing, but something about that didn't feel right.

I didn't want to copy his cones.

I never want to copy another person's innovations.

I like taking an idea and rethinking it, reworking it, and putting my own "spin" on it, pardon the pun. 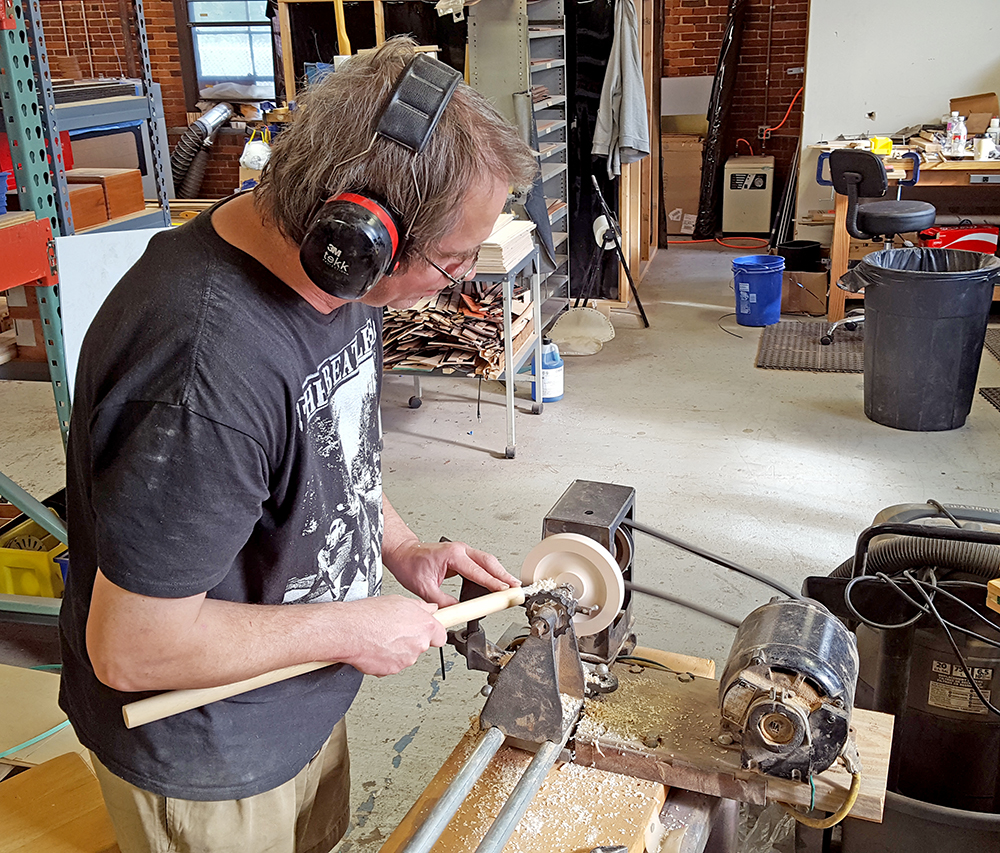 That "spin," and the resulting "eureka" moment, happened while standing out at the lathe after a mediocre attempt at spinning an aluminum cone.

"I wish we had some thicker metal to try," said Jeff.

I went into the warehouse and grabbed a couple of one-gallon lids.

We clamped one to our form on the lathe - it didn't exactly fit, but we got it on there.

Jeff started the lathe and applied the tool.

As that metal began to smoothly shape itself to the form under Jeff's steady hand, I had my EUREKA moment. That moment when you realize "holy smokes, this is actually going to work."

Not long after we had our first spun paint can lid cone.

Jeff removed it from the lathe, I held the rim with my fingernails and tapped the center with a pencil eraser... and it rang.

It didn't have the tinny, jangly "plunk" of a flat paint can lid, but a ringing timbre and tone.

Yes, it was rough - the metal had chattered against the form, there were some creases and rough spots, but it had worked.

Improved To Wear The Gitty Name

By the end of the day, we had made a new, tighter-fitting form, and turned our first paint can lid reso cone that was good enough to carry the name of C. B. Gitty.

Over the next couple of days, we made additional forms for the two other sizes of lids we carry (quart and half-gallon).

We also found a better lathe on Craigslist for production turning (though we are still using Grandpa's old Craftsman lathe for the gallon-size lids).

A whole new line of American-made products all springing from that one special moment, when, mostly on a whim, we tried something crazy... and it worked.

You Can Proudly Use An American-Made Cone

Even in a business such as C. B. Gitty, where we're always working on new things, it's rare to get a "eureka" moments.

Though this particular innovation isn't going to change the world, within the special niche of homemade instrument builders, I think it's a pretty big deal.

To make an American-made product (the lids we're spinning are themselves made in the USA) like this, available at a friendly, affordable price, is what C. B. Gitty is all about.

We have more work to do, learning about spinning cones, trying different methods, and experimenting with other re-purposed objects... that's the future.

The present reality is that three new products that didn't exist before are now available to CBG builders everywhere.

Innovative products created right here in our own shop. To me, that's pretty darn special.

Check out some other of our fun and informative articles about resonators and American-made products linked below.

Why Use Reclaimed Materials To Build Cigar Box Guitars?