What exactly is a rod piezo? And why should you consider using one to electrify your next cigar box guitar build?

To answer those burning questions, in this article you’ll...

And after reading this instructive article, you’ll gain the confidence to build with rod piezos, thereby raising the level all your future electric cigar box guitar (CBG) builds.

When looking at the use of piezo elements as pickups in acoustic instruments, and specifically in CBGs, there are two main types that get used – disk-style piezos, and rod-style piezos.

Because they tend to be cheaper and easier to find, disk piezos as pickups tend to be more widely used in the CBG community.

However, many builders feel that rod-style piezos offer superior sound and tonal quality.

This article delves into the differences between disk and rod-style piezos, and takes a close look at how rod piezos are put together.

First, a here’s a little bit about piezo basics.

Anatomy Of A Piezo Pickup

Piezoelectric elements, whatever the type, are based around layered ceramic wafers and conductive metal.

The interaction between the ceramic and the metal works in two ways: if outside electrical current is supplied, then the piezo will produce sound. This property allows them to be used as buzzers and simple speakers.

Or if no outside current is supplied, and instead the piezo is subjected to changes in pressure (such as by the vibrations of guitar strings), then the interaction of the metal and ceramic actually creates a small amount of electrical current.

This current, when wired into a guitar amplifier, is magnified and reproduced on a speaker in the form recognizable to the human ear as being an amplification of the acoustic instrument.

As you can see, for such a simple little device, piezos are really quite versatile and useful.

As mentioned above, piezo disks are the most commonly seen type of piezo element. They are used as buzzers and small speakers in a wide range of household products, such as alarm clocks, microwave ovens and more.

Really, the most basic of piezoelectric elements, piezo disks, are just thin disks of brass or stainless steel, on which is glued a ceramic disk.

To function as a pickup, one lead of a pickup harness is soldered to the ceramic element, and another lead soldered to the metal. The other ends of the harness leads can be soldered to a volume control or directly to a jack.

Cigar box guitar builders place these disks inside the cigar box, or build them into the bridge, so that they will pick up as much as possible of the guitar’s vibration for amplification.

Rod piezos, on the other hand, are constructed specifically for use as acoustic instrument pickups.

Rod Piezos Are Made To Be Pickups

Instead of a disk, rod piezos tend to be long and thin.

The main body of the rod is conductive metal, and onto this metal are glued a number of small ceramic wafer squares. 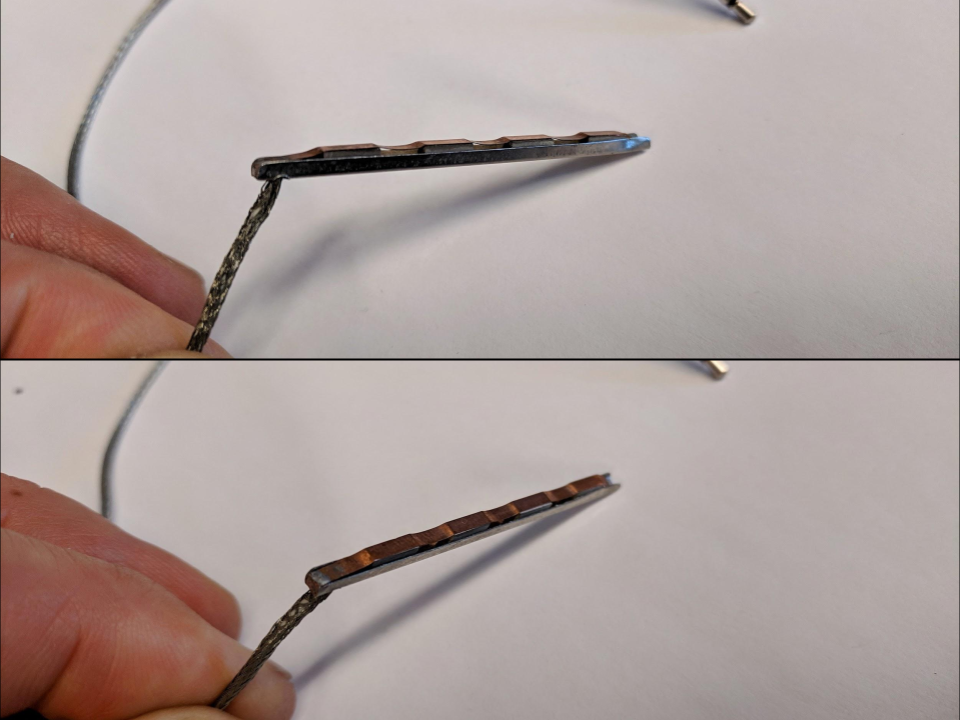 Across the top of these wafers runs a thin strip of conductive metal.

This strip, and the conductive base under the ceramic wafers, are both connected to the leads that run from the piezo rod (generally a single wire with an insulated positive lead inside a wired mesh ground).

The number of the ceramic wafers varies depending on what instrument the rod piezo is meant to be used in.

By far, the most common setup is to have 6 wafers – one for each string on a conventional 6-string acoustic guitar.

But other types are also manufactured – such as a shorter 4-wafer rod for mandolins, ukuleles, and 4-string CBGs, and even a 3-wafer rod, perfect for 3-string CBGs. 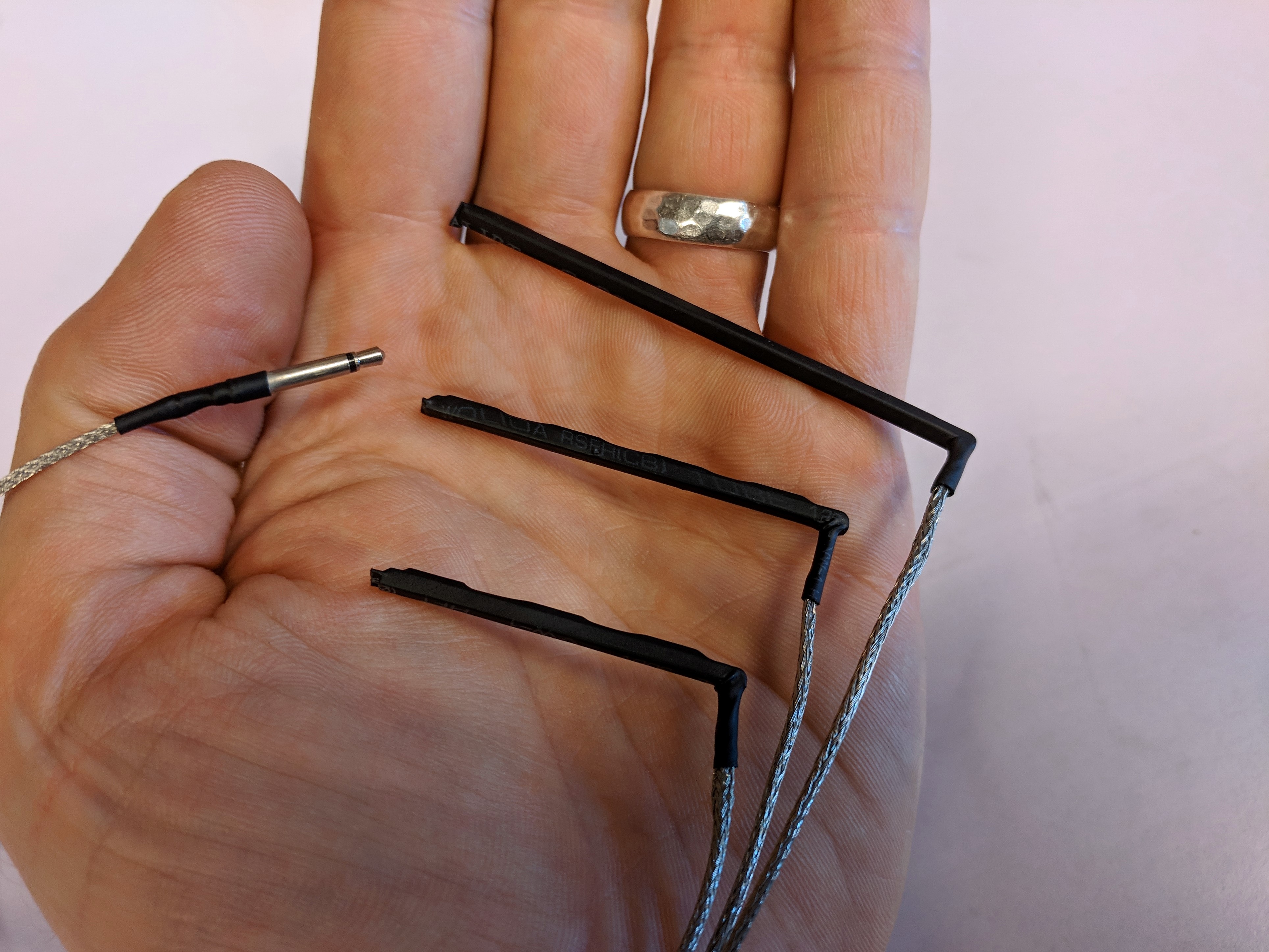 The rod piezo is meant to be mounted directly under the bone (or plastic) saddle on a conventional acoustic guitar.

This means that it is subjected to as much direct string vibration as possible, which leads to the best possible transmission of the acoustic sounds to the amplifier.

For your CBG, you can similarly install a rod piezo under the saddle in the bridge, or purchase one of our rod-piezo embedded Rail Runner bridges made from exotic hardwood and brass right here in the C. B. Gitty shop.

Remember that piezos respond to vibration – so the more directly the strings affect it, the better.

Because the rod piezo has a separate wafer for each string, they tend to reproduce the instrument’s sound much better than a disk piezo, which is unable to be directly affected by every string.

This is why many builders, such as King of the Cigar Box Guitar, Shane Speal, prefer rod piezos over disk piezos in their builds – the quality of the sound really is superior to what you can get out of a disk piezo.

Install a pre-amp unit along with a rod piezo, and suddenly your cigar box guitar starts getting into some seriously good tone. 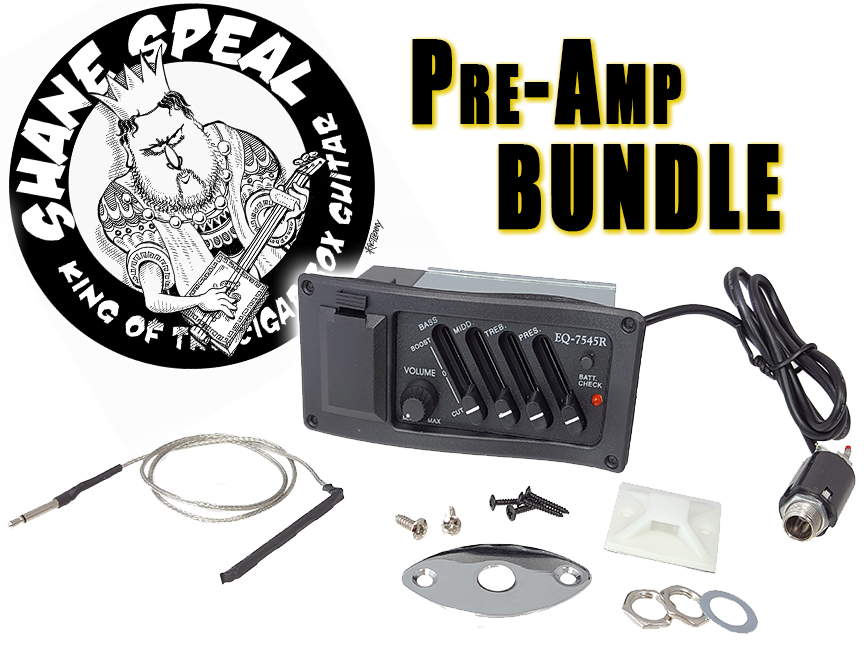 With this article you've gained a better understanding about piezo elements, including the...

Now that you're armed with this knowledge, please share it with a friend by posting this article to Facebook or emailing it to a friend.

What will you build next with a rod piezo pickup?

Learn more about how rod piezos will improve the sound of your cigar box guitars with the following must-read articles: